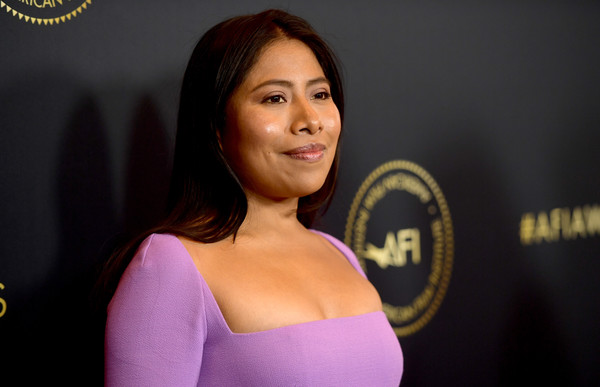 I may still be exhausted from covering the Golden Globe Awards on Sunday night, but awards season doesn’t stop for no one. This coming Sunday night is the Critics Choice Awards and I am really excited to see what the nominated stars, members of nominated casts, and presenters all will bring to the red carpet. 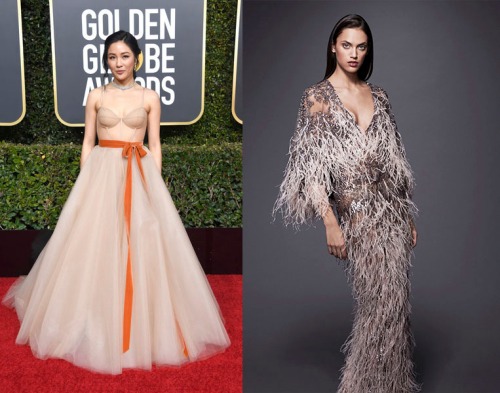 Constance Wu FINALLY got everything right when she stepped on to the red carpet this past Sunday wearing custom Vera Wang for the Golden Globe Awards. She didn’t look lumpy, puckered, or like the gown was wearing her and I absolutely loved it. I am excited to see what she will wear on the red carpet this coming Sunday at the Critics Choice Awards where she is nominated for Best Actress in a Comedy Movie and Best Acting Ensemble. I went for extreme embellishments with this neutral beige Pamella Roland caped column gown which features a sheer, crystal embellished body in a straight silhouette, plunging neckline, cape sleeves,  and ostrich feathers scattered all overt for Constance. I worry a little bit that she doesn’t quite have what it take to really push through all those crystals and feathers, but I do believe that with precision styling that this look would be absolutely killer! A sleek bun, smokey eyes, soft antique rose pink lips, perfect tailoring, silver Jimmy Choo ‘Lance’ glitter sandals, and simple Anita Ko diamond hoop earrings all would ensure that this look is perfectly styled to suit Constance’s style. 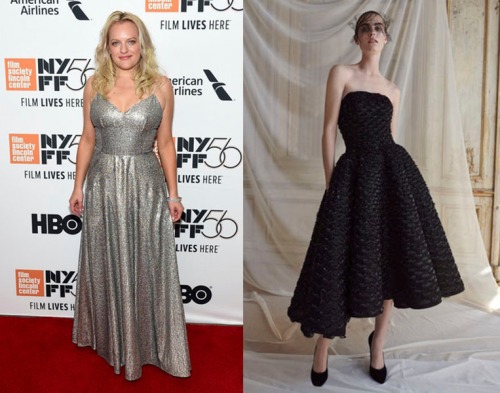 Elisabeth Moss shunned the requisite gown for the Golden Globe Awards instead opting for a short custom Dior Couture cocktail dress. Was it one of the best things that Elisabeth has worn in a really long time? Yes. BUT it was not right for the Golden Globe Awards. I honestly probably would have put it on a best dressed list had she saved it for the Critics Choice Awards. I decided to keep the short black dress trend going for Elisabeth picking this black Ashi Studio Fall 2018 Couture strapless tea length textured gown which features a corseted bodice and a full skirt. If I can’t compel Elisabeth to push the boundaries on her style I guess I will have to settle for making the best out of her small box and that is exactly what I think this gown would do. A loose romantic updo, defined eyes, nude lips, black Christian Louboutin ‘Follies Lace’ pumps, and a pair of Chopard Red Carpet Collection diamond and emerald drop earrings would just elevate this look. 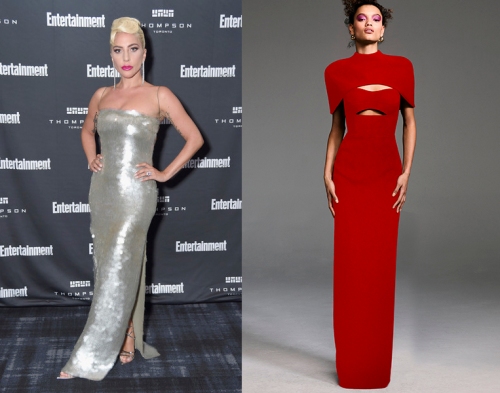 Lady Gaga, unintentionally, paid tribute to the original A Star Is Born with her periwinkle custom Valentino Couture gown at the Golden Globe Awards. I don’t think we will see any more references to the previous films after that moment. I went for sleek structured glamour for Gaga to bring to the red carpet this Sunday at the Critics Choice Awards. She hasn’t worn a single Brandon Maxwell piece since she stopped working with the designer as her stylist, but I am hoping that the bridge isn’t burned because some of my favorite Gaga looks have come from his atelier. I would love to see her give this sleek regal red Brandon Maxwell Pre-Fall 2019 cape overlay buster crepe gown which features a column silhouette, cut out detailing along the front, and a modern strong shouldered cape overlay a turn on the Critics Choice red carpet. Would Gaga go for this simple of a silhouette for a major awards show? I don’t know but I do believe that with a sleek bouffant style updo, thick winged eyes, matching red lips, a pair of red Christian Louboutin ‘Catchy Two’ peep toe pumps, and dazzling Alexandre Reza ‘Pigeon’s Blood’ ruby spiked hoop earrings that Gaga would continue to give me life on the red carpet. 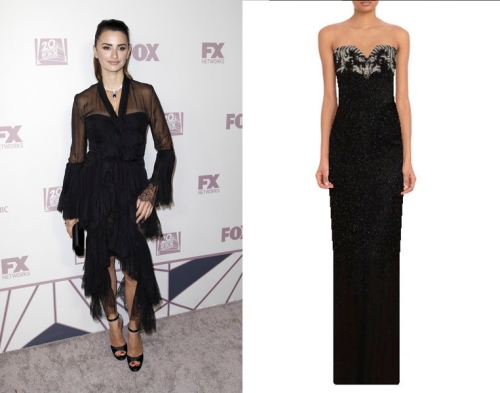 When Penelope Cruz was first offered the role of Donatella Versace in The Assassination of Gianni Versace: American Crime Story from Ryan Murphy she didn’t immediately say yes. Before she accepted the role she had to call her good friend whom she would be portraying and find out how she felt about it. Donatella decided that if the show was going to happen that there wouldn’t be anyone else that she would trust with her story. The house of Versace had nothing to do with the show and gave quite a bit of push back on the representation of the late Gianni Versace in the series. Since the show first aired Penelope has not had a major Versace moment on the red carpet and while I think that Donatella was overall upset that this won’t be a division that lasts forever. I am hoping that at least once over the course of awards season that we see Penelope wearing a custom Atelier Versace moment on the red carpet. I was on 1stDibs.com when I saw a black and silver bead and crystal embellished bralet from the Gianni Versace Couture Spring 1990 collection and was inspired by it. Donatella has been pulling a lot of direct inspiration from Gianni’s archives lately and I think that taking that bralet and making it a strapless sweetheart bandeau neckline on a black beaded column gown would be a perfect moment for Penelope to wear on this red carpet especially when paired with a sleek bun updo, smokey eyes, red lips, a black Judith Leiber Couture ‘Cherry Cayman’ onyx clasp clutch, black lace Gianvito Rossi ankle cuff sandals, and a pair of diamond and emerald Chopard Red Carpet Collection pendant drop earrings. 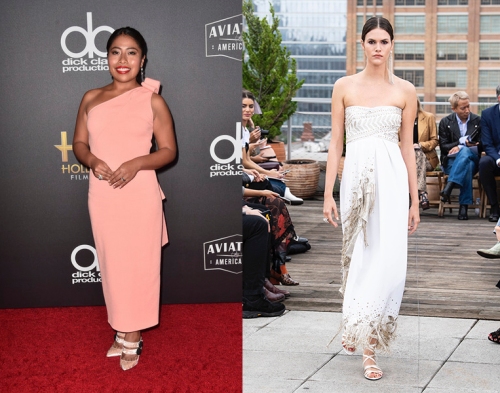 Heading into awards season Yalitza Aparicio was one of the new stars who I was most anticipating chic moments from. She is working with Kate Hudson’s stylist Sophie Lopez and has been working some magic with Yalitza headed up to the Golden Globe Awards. But on the big night I was incredibly disappointed with the unflattering custom Miu Miu gown that Yalitza ended up wearing on Sunday night. It all came down to shape and the shape did absolutely nothing for Yalitza’s curves. She has a chance to redeem herself on Sunday night at the Critics Choice Awards, where unlike at the Golden Globe Awards she is nominated for Best Actress in a Motion Picture. I went back to the same designer that Yalitza wore on the red carpet for her first awards event, Oscar de la Renta. I think that this white Oscar de la Renta Spring 2019 RTW strapless column gown which features a gold embroidered bandeau style bodice and a gold fringe trimmed wrap style skirt. This simple and elegant gown would be perfection on Yalitza and I think it would redeem her for that shapeless Miu Miu gown. This Oscar de la Renta gown should be paired with sleek center parted hair worn down, defined eyes, burgundy red lips, a gold Jimmy Choo ‘Clemmie’ clutch, gold Aquazzura ‘Studio’ sequin detail strappy sandals, and a pair of yellow diamond Chopard Red Carpet Collection chandelier earrings to really make this look chic from head to toe.