Avengers: Endgame is rumoured to be the final installment of the Avengers series of films. Honestly if they keep adding new individual superhero films out there and then adding those casts to the Avengers casts then I don’t know if there is a film budget big enough for a movie like that. As it is the premieres of this film are going to be like mini awards shows with the amount of a-list talent that is in the cast of Avengers: Endgame. I don’t think I have ever broken down a single movie premiere wish list into multiple parts, but for this red carpet I felt like I had to if I wanted to include everyone. Now I will be realistic and think that not everyone will be on the red carpet at the films premiere in LA and the promotions team for the film will split up the cast to promote the film in different cities, but I still think that the LA premiere of Avengers: Endgame is bound to be one of the most star studded movie premieres EVER. 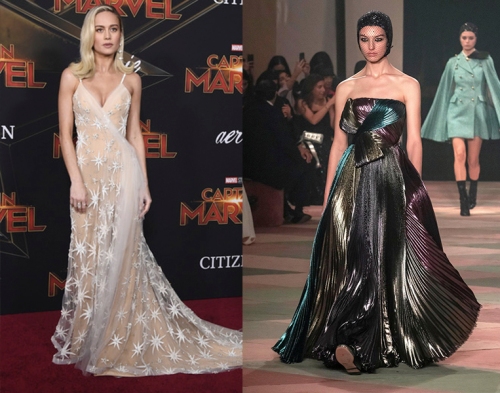 Coming off of her extremely well recieved debut as Captian Marvel I am sure that Brie Larson will join the Avengers on the red carpet at the LA Premiere of Avengers: Endgame. Brie really delivered chic moments that were all custom made to reflect her character for the Captain Marvel promo tour. I know that Brie likes to keep this very feminine and flirty on the red carpet so when I was looking for a perfect look for her to wear on the red carpet at this premiere my mind immediately turned to this soft metallic rainbow Christian Dior Spring 2019 Couture pleated lamé gown which features a strapless bow detailed bodice and an a-line skirt. It definitely fits into Brie’s inner unicorn and I know that she has the frame and confidence to really make this gown come to life on a red carpet. A big question for me is would Dior loan a couture gown for a movie premiere? I think with the caliber of this film that they definitely would even though its not a film festival premiere. Finish the look with soft Veronica Lake waves over one shoulder, defined eyes, rose pink lips, gold Gianvito Rossi green crystal embellished metallic leather sandals, and a pair of one of a kind Irene Neuwirth ‘Gemmy Gem’ pink tourmaline chandelier earrings and I know that Brie would continue to wow me on the red carpet! 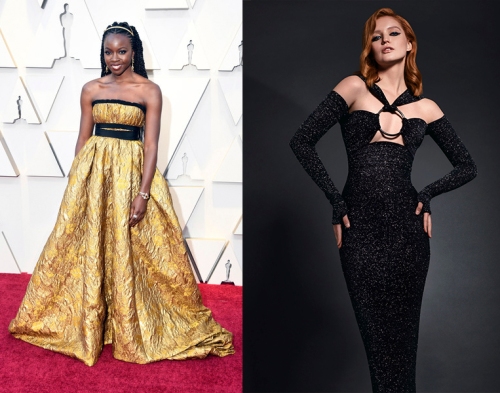 Danai Gurira killed the fashion game during the promo tour for Black Panther last year, but I have to say she kinda let me down this awards season. I wasn’t thrilled with many of her choices, but they weren’t terrible either. Where she tended to loose me was with her hairstyles. They tended to be overly complicated and overdone. I know that Danai could really WOW me and I want to see her a-game displayed when she steps onto the red carpet at the LA premiere of Avengers: Endgame. For this red carpet I turned back to a designer that not many have heard of that Danai wore at the London premiere of Black Panther back when he was even less well known, Jean Louis Sebaj. The Lebanese couturier is known for his edgy and sexy designs and I think that Danai could easily bring this black cold shoulder glitter lurex gown from his Spring 2019 Couture collection which features a halter neckline, o-ring detail, cutouts, long sleeves with thumb holes, and a fitted silhouette to life on this red carpet. Not everyone on this red carpet will opt for uber dramatic looks. This look isn’t exactly a big dramatic gown, but it definitely brings drama via its sex appeal. I would keep the styling really sleek and sexy opting for a sleek updo, smokey eyes, glossy red lips, a pair of black Aquazzura ‘Oscar’ sandals, and miss-matched Messika ‘Mata Hari’ wing diamond cluster earrings to really ensure that this look is absolutely amazing from head to toe.

Evangeline Lilly, from the Ant Man franchise, works with uber power stylist Law Roach and that makes me really excited to find out what she will wear on this red carpet. Last year we saw Evangeline rock red carpets wearing looks from Osman, Roberto Cavalli, Zuhair Murad, and Galvan last year and each look was absolutely amazing. I am excited to see what the two will cook up this year for the promo tour for Avengers: Endgame. I decided to go to the new hot designer on the scene Cong Tri. The Vietnamese designer made his New York Fashion Week debut earlier this year with a cast that included a host of Victoria’s Secret Angels and since then he has dress Josephine Skriver, Katherine McNamara, Kate Bosworth, and Rita Ora. I definitely think that we will see at least one of the designers looks on the red carpet at this premiere and I think that this metallic gunmetal silver Cong Tri Fall 2019 RTW strapless gown which features intricate draping, a side split, and a sheath silhouette would be absolutely amazing on Evangeline. It is the perfect balance of sexy and glamorous and I think that if paired with a romantic updo, defined eyes, dark rose pink lips, a pair of black Jimmy Choo ‘Shiloh’ jewel embellished sandals, and chic Amwaj diamond waterfall earrings that Evangeline would own this moment on the Avengers premiere.

Last year at the premiere of Avengers: Infinity War Karen Gillan shut it down with a major Thom Browne structured gown on the red carpet. I have long loved her and I definitely have high expectations for what she will wear on the red carpet at the premiere of Avengers: Endgame. I decided to go for an absolutely major fashion moment picking this black Givenchy Fall 2019 RTW strapless gown which features intricate silver crystal embellishments, and sheer pleats for Karen to rock on this red carpet. It isn’t an avant garde look, but since Givenchy is such a coveted brand to be dressed by I know it would still be a major moment for Karen to wear on this red carpet. I think that styling this gown with sleek center parted hair tucked behind the ears, a pair of black Christian Louboutin ‘Faridaravie’ silver round studded PVC strap sandals, and chic Nikos Koulis ‘Lingerie’ collection white gold set diamond, emerald, and silver pearl drop earrings would all ensure that this is an absolutely amazing moment for Karen.

Letitia Wright hasn’t given me a major fashion moment in a while. I had high expectations for her looks over awards season and her subtle looks from Stella McCartney, Christian Dior Couture, and Erdem just didn’t live up to those expectations. I want avant garde and bold glamour from Letitia on the red carpet at the Avengers: Endgame premiere. I would love to see her bring bright drama to this red carpet wearing this hot pink, purple, and orange Sies Marjan Fall 2019 RTW asymmetrical tulle, lace, and satin column gown. I love me some Sies Marjan and out of all the cast members of this film I definitely think that Letitia is the perfect person to really bring this gown to life on the red carpet. A pair of black crystal embellished Stuart Weitzman ‘Nudistsong Stardust’ stiletto sandals, a sleek side parted low bun, simple defined eyes, nude lips, and Anabela Chan ‘Greenberry’ emerald cabochon drop earrings that also features 70 pave-set blue sapphires, green garnets, white diamonds and freshwater pearls all would ensure that this would be a super fantastic moment to ensure Letitia brings bold style to the red carpet at this premiere.

Last but not least for this list is Black Widow herself Scarlett Johansson. She has never lived up to my expectations at any of the Avengers premieres over the last several years and I am hoping for her to bring the glam to this red carpet. I would love to see her bring sexy glamour to life on this red carpet wearing this blush Zuhair Murad Spring 2019 Couture gown which features an asymmetrical halter neckline, pleated and sequined construction, a slashes bodice, and a thigh high split. It is something I really do think that Scarlett could handle rocking on the red carpet, but I don’t know if she actually be daring enough to rock this look on the red carpet. It is that incredible glam moment that I could have easily seen ScarJo wearing about 10 years ago, but this gown would make for an absolutely gorgeous moment for Scarlett to wear on this red carpet at the end of this month especially if paired with a sleek updo, defined eyes, dusty rose pink lips, nude Gianvito Rossi ‘Lacey’ strappy sandals, and dazzling Harry Winston diamond cluster drop earrings.

The LA premiere of Avengers: Endgame is expected on Monday April 22, 2019.