I have been watching the Spring 2020 Menswear collection runways closely over the last several weeks from New York to London to Florence to Milan to Paris. Has it been by favorite season? No. Not in the least. When I do these several week long lists of favorites I usually have a hard time editing them down to just 10 because there are too many options. While there were jackets, shirts, pants, shoes, and more that I liked on an individual level that I liked overall looks were not up to the same standards that designers have set over the last several seasons. When it comes to menswear on the red carpet many stars wear custom made more classic styles than what typically come down a runway, but there are 10 looks I definitely want to see on the red carpet.

Alexander McQueen: I miss seeing Alexander McQueen menswear on the red carpet. The brands creative director Sarah Burton has decided this year to show her menswear collection in private appointments releasing a lookbook of the collection to media sites like Vogue.com and WWD. The Alexander McQueen Spring 2020 Menswear lookbook only consisted of 9 looks. I wanted every single piece. The inner magpie in me was immediately drawn to this black tuxedo which features an intricate crystal embellished embroidery. I have lauded Darren Criss lately for really embracing his inner magpie and I definitely believe that he would be able to make this look a major moment on the red carpet. Maybe for the Emmy’s?

Celine: I have been eating my words of hate about Heidi Slimane at Celine. I personally wanted almost every jacket and coat that Heidi sent down the Paris Fashion Week runway for the Celine Spring 2020 Menswear collection. What I did notice was that it was a lot of the same styles, even in the same colors and details, that he sent down the runway at Saint Laurent. Now menswear doesn’t have the same diversity of style that womenswear does, but I want to see Heidi try something new. But I know that isn’t going to happen because he definitely lives by the if it ain’t broke don’t fix it mentality. I actually have several options from this collection that I want to see on the red carpet, but it was the fact that this ensemble which features a chocolate leather trucker jacket, black and white polka dotted button down, and dark grey pinstripe pants made me think of Brad Pitt I knew it was the one to feature on this list. The fact that a runway look made me think of someone who I do not think of when creating wish lists at all proves that Heidi Slimane’s Celine is a magical brand.

Dior Man: Since his debut last June Kim Jones has been killing the game at Dior Man. He has taken the classic code of the Dior man and made him modern. The way he incorporates not only classic menswear, but also the more feminine codes of original Christian Dior womenswear is brilliant. It makes me want to see what he would do as the womenswear creative director. Literally when I see the brand on the likes of Gwendoline Christie, Bella Hadid, and Chloe Grace Moretz wearing the brand just as easily as Nicholas Hoult, Nick Jonas, and A$AP Rocky I feel like he could bring major hype and sales back to the Dior label. The Dior Man Spring 2020 Menswear show opened strong with this dove grey and powder blue new take on the Morning Suit which features an asymmetrical lapel paired with an untucked button down, slim fit pants, and matching sneakers and I was sold from the get go. The look needs someone with an effortless cool to make it really come to life on the red carpet and that is why I think Timothee Chalamet is the perfect person to put this look on his rack. He does have the promo tour for Little Women coming up.

Dries Van Noten: One of my favorite designers, for both womenswear and menswear, is Dries Van Noten. He is a master of print, embellishment, cut, draping, fabrication, and styling. His shows are always a visual feast. He doesn’t go for big theatrics when it comes to his shows letting the clothes speak for themselves. I tend to think he is one of the more underrated designers and one of the least utilized on the red carpet with the most potential. I personally want many pieces of this collection for my wardrobe. I LOVE this grey plaid double breasted suit which was paired with a green floral print button down. It would want to wear this for a great dinner date or to one of my more dressed up days of work. I also think that it would be a great option for Eddie Redmayne to consider as he and his stylist start planning looks for fall film festival season where he is expected to be promoting The Aeronauts.

Emporio Armani: When it comes to any Armani collection, save for the Prive shows, you have to wade through a lot of the same before you find the 2-4 pieces that really stand out. That was no different with this Emporio Armani Spring 2020 Menswear show, which almost reached 100 looks. When I think of the Armani man I think of classic and perfectly tailored which is why I always scratch my head at the brands runway shows which typically feature more of a loose fit look than what we see from the brand when sold or worn. There is a bit of a disconnect, in my mind at least. But like I said there are typically a small number of pieces that I end up drawn to this navy double breasted tuxedo jacket which features pixelated chevron embroidery. This is the style of look I expect from Armani and Henry Golding, who does classic with a twist in the best way, would rock it. Now I would leave the satin pants from the runway at home in favor of something a little more classic and fitted.

Givenchy: This season Givenchy creative director Clare Waight Keller decided to do things a little differently. First she decided to host her first solo menswear show. Since she took the reigns of Givenchy over almost 2 years ago she has shown her menswear mostly along side her womenswear on the runway adding a lookbook for each season to show additional looks. She also decided this season to leave the brand usual perch during Paris Fashion Week to be a centerpiece show during Florence’s Pitti Uomo fashion celebration. Like almost all the collections this season this one was full of pieces I loved. This was the only show I got to watch on a livestream this season and when I saw this black and silver sequined coat I let out a bit of a gay gasp and got some major wardrobe envy. It is a statement piece and I definitely want to see it on a red carpet at some point. Chadwick Boseman has many projects coming out and given the fact he is a great friend to the house of Givenchy I feel like it isn’t a stretch to wish to see him bring this coat to life.

GmbH: There are always so many shows during each season it is hard for me to look through all of them. If it isn’t a top label brand, like any of the other brands on this list, then it needs a good preview look on Vogue Runway. Well Berlin based brand GmbH did just that. The brands tailored coats that came down the Spring 2020 Menswear runway during Paris Fashion Week. The brand has shown collections for several seasons, but this was the first I was drawn to click on the collection and actually inspect the clothes that have come down the runway. There were definitely many things that I was drawn to, but when I pick looks for this kind of list it is the ones whom I immediately see someone wearing the look that ultimately make the list. They might not be something of my particular personal taste. That is the case with this look which features a loose fit white button down paired with high waisted gold chainmail loose fit pants which I immediately pictured on Miguel.

Saint Laurent: Like Clare Waight Keller this season Saint Laurent creative director Anthony Vaccarello decided to forgo the brands typical seat on the Paris Fashion Week schedule to show his Spring 2020 Menswear show on a Malibu, California beach. The collection was very much what we have come to expect from Saint Laurent. I feel that while Anthony was the perfect choice to pick up where Heidi Slimane left off that now that Heidi is back, and in a major way, I want to see something new from Anthony at Saint Laurent. What is Anthony’s take? That is what I want to know. That being said this collection was incredibly good. It was full of looks that were red carpet ready and that can easily transfer from the runway and red carpet to inside of someone’s closet (is anyone from YSL is reading this and wants to send me samples to add to my wardrobe I am game!). Rami Malek has been a great friend to Saint Laurent this year including being a guest of the label to this years Met Gala so he was already on my mind when I was looking through this collection and really popped into my mind when I saw this white double breasted skinny suit paired with a black button down and a crystal studded silk ascot. 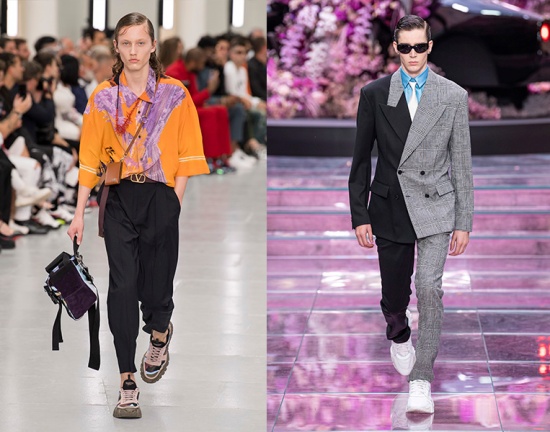 Valentino: My heart has gone to Pierpaolo Piccioli’s collections for Valentino since he became the solo creative director for the band. The looks have definitely veered away from the suit and tie kind of vibe that the brand was known for under the houses eponymous founder to more of a street wear and every day wearable label. That was most evident this season. The looks that Pierpaolo sent down the runway for the Valentino Spring 2020 Menswear show. He started the show strong giving me my favorite look from the collection with this orange and purple bowling baggy fit bowling shirt and a baggy high waisted pant with a tapered ankle. I want to be this cool. I don’t typically like much of an oversized vibe, especially not for myself, but I want to wear this while going grocery shopping. I feel like I might have to fight Aladdin star Mena Massoud for this look though.

Versace: Donatella Versace referenced The Prodigy and the bands late front man (and friend of hers) Keith Flint as the source of inspiration for the Versace Spring 2020 Menswear collection. It was a bit of 80’s rock and roll meets 90’s grunge meets punk and Versace glam. I believe that the collection will definitely be a hit with the music set like MIGOS, Kanye, and Nick Jonas, but it was Top Gun: Maverick star Miles Teller that came to mind when I was thinking of the perfect person to wear this solid black and grey plaid Dr Jekyll and Mr. Hyde double breasted fitted suit. I saw this suit and immediately fell in love. I want it in my closet and I am sure that someone over the course of the next several months will bring it to life on the red carpet.

So tell me what was your favorite look or collection from the Spring 2020 Menswear season? Is there someone you want to see wearing one of these looks? Don’t be afraid to leave a comment with your thoughts!